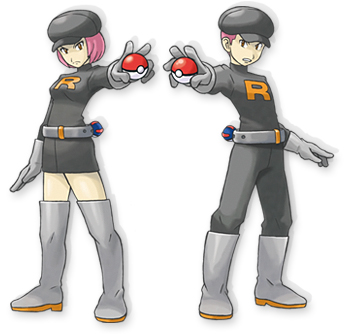 Mario and I kind of forgot about SacAnime until two weeks ago. When we remembered, and realized it was so close, we needed a cosplay that would be quick and easy, and not so harsh on the pocketbook, since we are still elbow deep in our Blizzcon costumes. After much consideration and searching through the internet, we decided that yes! We would be Team Rocket grunts. Not that hard, right?

Finding all of the parts was the hardest part. We went to several stores in the area and were only able to find the hats, nothing more. It took a few hours of searching online to find the rest of the materials.

Now, when I say ‘easy, quick costume’, I mean you don’t have to sew anything. All of your pieces are already made, and the most you have to do is paint. This is good for a quick Halloween costume, or if you want something quick and relatively cheap and easy to do. It cost us around $70 for all the materials per costume (we made three!).

I figured since it took me so long to find all the materials online, I’d go ahead and post here where I got my stuff… of course, in the future they might not be available, but I’ll try to keep this updated. If you can’t find these hats, boots, gloves, belts, skirt or black turtleneck, then here you go! 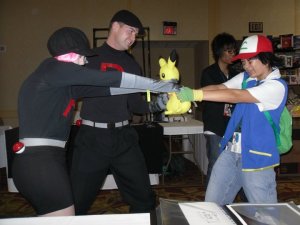 Depending on the season, you might want to check your local department stores before you go buying things online- shipping can be a pain sometimes. If you can’t find some of the pieces, though, here are some links that are hopefully helpful!

For the guys’ boots, we used these, and painted them gray. Originally we had said to paint the boots, but we ran into a problem with the paint flaking off if you bend your foot/ankle a lot while walking. This varies from person to person we found, because the paint flaked for Mario where he was bending the boot while walking, but not for our other friend who wore it. You might be able to find a good paint that won’t flake and will adhere to the leather, or you could even get some leather dye (probably the best bet, actually) from Tandy and dye the boots that way. For my boots, I found these, and since they were already the perfect color, we didn’t have to bother with them. 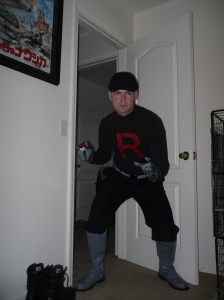 For the turtlenecks, since it’s just now starting to be fall (and in California, so I don’t even know if I’ll find turtlenecks in the stores anyway) the only place online I found them at a reasonable price was at Cabelas, but Amazon has a lot of turtlenecks right now. We had trouble finding ours four years ago (updating this in 2014), so apparently turtlenecks are more in style now? 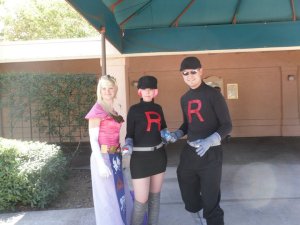 (with a Zelda at SacAnime)

For the big R, we decided to do red instead of orange (since it’s always been red, I guess) and just got a blank stencil sheet, printed out a big R with our printer, and traced it onto the stencil sheet. Cut it out, leave some lines of plastic so that the R continues to look like an R, and tape it to your shirt and paint away. We used a white paint base on the shirts since they’re black. Note: you can also buy iron on printer sheets, print out  a big red R (remember to size it out on regular paper first) then cut it out and iron it on. This is just a bit more expensive than the stencil sheet, but not much more.

I found the skirt here, but it looks like the exact one that I got isn’t available on the site anymore. They have plenty of other black skirts, though. Thrift stores are also good to check out, for any of the clothing items, really.

Black slacks you can literally find anywhere, at any department store, or even a thrift store. The boys already had some laying around.

We found the belts here, but again, it looks like the exact ones we got are already sold out. Here’s another place I found with similar belts. If they’re sold out as well, try googling ‘gray canvas belt’ as Yannie says in her comment below, and you should find several.

The gloves can be found here ( I love this site for their wide range of colors!) and we found our Pokeballs at ToysRUs, but you can probably find them online pretty easily as well. We’re clipping one to our belt, and holding one.

We decided not to put the orange on the belt, and just keep it as is so that we could keep a kind of military look to the costume.

And lastly, the hats!

(Oh, and if you want to stick with the pink hair, here are several wigs that would work for boys or girls (since there are boy cut ones) and they come in two different bright shades of pink!)

Some variations that I’ve seen of the costumes include wearing black pleather pants instead of a mini skirt, which honestly looked amazing and is something I’m going to do in the future for a con since I’ll be sitting at a table in artist’s alley all day and really don’t want to do so with a mini skirt on.

Hopefully that was helpful, and there will be many pictures to come tomorrow!

If any of the links don’t work anymore, please leave a comment to let me know, and I’ll find another similar piece for the costume!