Is there a wig that you need for an upcoming cosplay in a color that you just can’t seem to find anywhere? It’s okay, I have your solution! Just find a blond or white wig in the right style that you’re looking for, and dye it!

There are several methods that I know of for dyeing a wig. The first is the sharpie method, where you harvest the ink from several sharpies and dye your wig with it. The second is  the FW ink method, where you use FW ink, which is an acrylic ink, and mix it with alcohol and use that to dye the wig. The last method is using Katie Blair’s wig dye, which is easy and premade for you, but can be expensive if you’re dyeing a very long or thick wig.  I prefer the FW ink method.

Later on I’ll make a tutorial on how to dye a wig using this method, since it is slightly different than doing it with wefts. Again, I apologise for the shadows in the picture, next time I’ll try to get the table moved elsewhere so that we don’t have the shadow from the overhang in our way.

So first things first, here is what you’ll need: 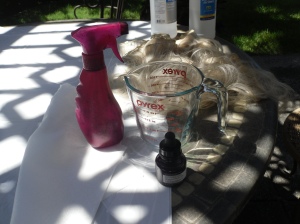 A glass measuring cup (I think plastic would stain, haven’t tested it, though), latex gloves, a spray bottle that can hold at least 8 oz, a bottle of FW acrylic ink (I’d check your local art supply), a table outside and something to line the table with- preferably garbage bags.You’ll also need a large bottle of 70% alcohol, and a wig head with pins to pin the wefts to it, as well as something handy to stir your dye with before pouring it into the bottle.  Make sure you wear your gloves through the whole thing, and old clothes, just in case! 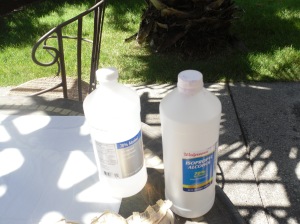 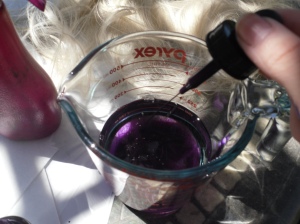 Now, you want to cover your table with the garbage bags, so that you don’t stain anything. Lay out the wefts in a row, just one layer and we’ll add another layer each time we add more dye. Weigh down your bag if it’s windy outside, and get to mixing! The formula for the dye is eight droppers full of ink to one cup of alcohol. That’s one dropper full of ink to each ounce, in case you have a bigger spray bottle and want to make a bigger batch. If you can’t find the ink in the color that you want, then mix colors! It’s fully customizable. One bottle lasted me through a full wig (the same type of wig that I cut up for the wefts). I was very generous with the applications, though, so you could probably make it last longer. :D Mix the ink and the alcohol with a spoon (or whatever you have on hand, really) and pour it into the spray bottle! That mixing cup comes in handy now, doesn’t it? 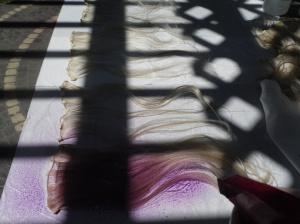 Start spraying away! Make sure you spray the dye evenly, and that every bit of hair is coated. Feel free to flip the wefts over, just to make sure. 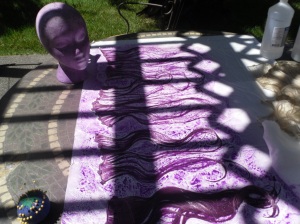 Here you see all of the first layer of wefts are nice and covered in the dye. 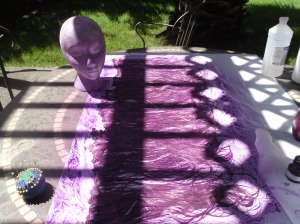 As you finish covering one layer of the wefts with dye, let them sit for a minute and then put another layer of wefts over it. You can gently pat the new layer to get any excess off and then start spraying again! Above you can see all of my wefts covered in dye. Let the wefts sit for about an hour in the sun, then pull them off of the bag. They should be mostly dry. 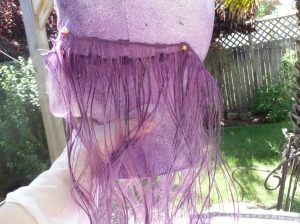 Now comes the wig head. Starting at about halfway down the wig head (or lower, if you have more wefts) pin each weft around the head, one above the other. You should end up with this:

Now you want to go over the wefts one more time with the dye. Feel free to pick up the head, turn it sideways, upside down, anything you need to do to get the wefts completely covered. Now, you might ask, “Why didn’t we pin the wefts to the wig head in the first place and just dye it from there?” Well, when you dye wigs using this method, the dye tends to run down the hairs very quickly. Most of the dye ends up on the ground or table, and the ends of the hair look great and colorful while the roots of the hair or wefts are lighter. This is why I started with laying them on the table, we already have a large amount of color on the wefts. 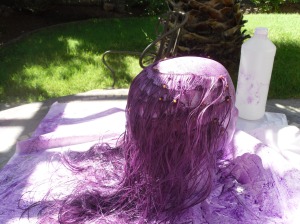 Now the wefts have another layer of dye on them, and you can go rest for a few hours until they’re dry. Mine took four hours to dry completely, and always make sure that your dye is dry before you rinse it out!

The next step is to take your wig inside, and rinse it under cold water. Or you could use the hose, your preference. Rinse it until the water runs clear, and I suggest gently washing it in wig shampoo, as well. My base wig was rinsed a good three times, and still rubbed purple onto my white shirt when I wore it. After I rinsed it with wig shampoo, I had no problem.

This is where a mannequin head holder comes in handy. You’ll want to clip it to your table outside so you can sit your wig head on it while your wefts are drying. You want your wefts to hang free while they’re drying so that they dry hanging straight down, instead of being in a funky shape.

And voila! A few hours later, just unpin your wefts from your wig head, and you have a handful of perfectly colored wefts to match your wig!

The next post on sewing in wefts coming later this week!