Back in the start of 2011 a friend asked up to help her out with a fan art inspired Terran medic. 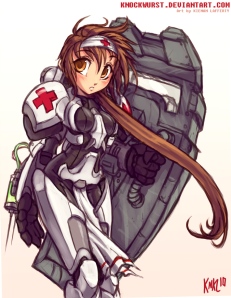 I took on the project even though we were knee deep in the Kerrigan build at the time. I have love of prop weapons and accessories making it very hard to turn down the opportunity to make a something as cool as a 4foot shield!!

I had made a few other shields and had learned a few key items that would have to be tackled for this project to work.

1. A strong core is key to a lasting and usable prop!
2. Weight is a major factor if it is for extend use. (Blizzcon!)
3. Durability is also key for a convention bound prop. (Blizzcon!)
4. Easy to put on and take off so that you can rest.

Number 1 was solved with a durable double walled plastic sheeting that normally serves its life as walls for greenhouses. My local Tap-Plastics had some in stock and cut me a great deal on a piece of pre-cut scrap!! 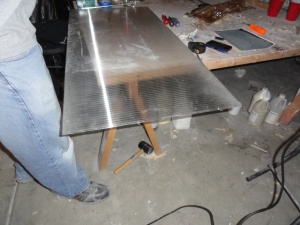 Number two and number three were easy. I turned to my trusty prop making material of pink insulation foam or commercially known as Extruded polystyrene. 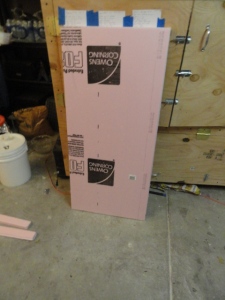 I started with a rough diagram of what I was building. Becouse this is a “Military” shield I used some liberties and just make most it symmetrical and on the whole or half inch for ease of constructions. 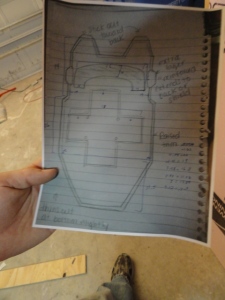 Based on the dimensions of the person carrying it, total length ended up being just shy of 4 feet and a width of 28 inches. Once I had transferred the design across to the foam, I did my cutting and sanding and quickly had a nice rough shape. 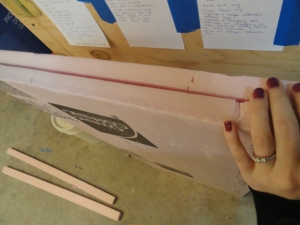 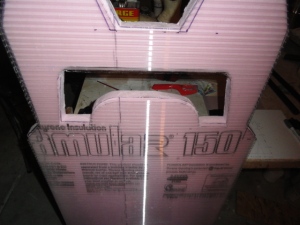 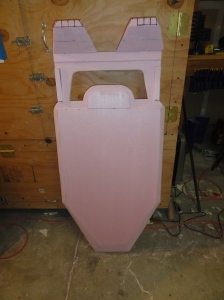 I cut the window out and would later place a single sheet of .030 plastic sheeting in it to act as the window. The edges were beveled to a 45degree slope and I added extra material to the tops of the back piece so that i would be able to create the look from the original photo. 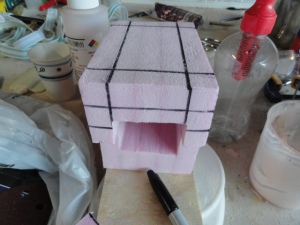 I needed to add material to sides of the windows, these I assume are for more of an aesthetic look but the process was easy. A few layers of pink foam staked to the right thickness, then sand and bevel them out until shape was achieved. You can see in the photo the lines that would be the edges of the beveled areas. I just sanded it until i had a flat slope from one line to the next. 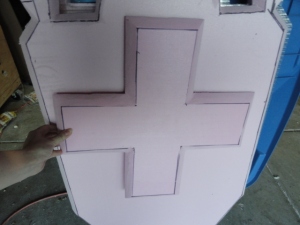 Same process was done for the Medic cross on the front and it would be glued in place at a later time once it was painted.

First step before paint when working with foam is to seal it. If you skip this step expect to have a prop that always looks like its made of foam. We use Gesso as a primer, this shield took 3 layers before we had a nice even finish. 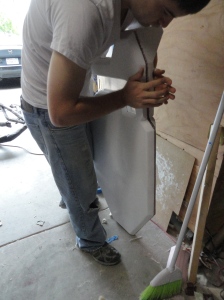 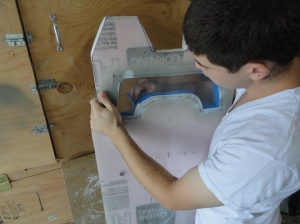 A test fit of all the parts and I masked the window off to avoid any chance of paint getting on it. 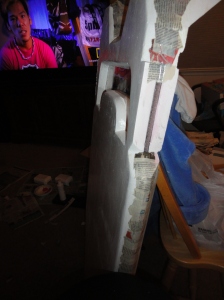 The shield was assembled using a spray on 3M adhesive #77. Most glues will not bond well to a slick surface, but spray glues do a great job for some reason. I had expected a gap around the edge that would need to be filled due to the thickness of the plastic core. I used watered down wood glue as a “paper mache” and covered the gap with hand torn paper. This results in the best and smoothest edge. Once dry it was Gessoed over and sanded smooth to match the rest of the surface. 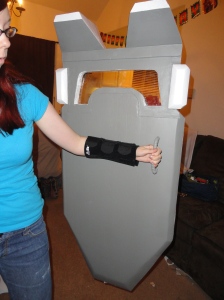 Number 4 (Easy to put on and take off so that you can rest.) was a lucky find at a local sporting good store. The black brace around Alice’s arm is exactly that. It was a re-purposed shin brace. I choose this one for two main reasons, one it had a wide area and good strong hold with the velcro. Two, it was reinforced with horizontal rubber bars that provided a great way to mount it.

I don’t have any photos, but before I put the front of the shield on, I threaded three bolts through the foam and plastic and used large fender washers for maximum surface area to avoid tearing the neoprene. I inserted some hard plastic spacers between the plastic core and the washers inside of the brace so that i could tighten the bolts without crushing the pink foam.

The handle was made from a bent piece of 1/4 inch threaded rod with flexible wire conduit over the top. 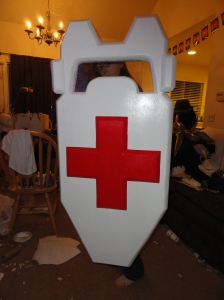 Final prop made a showing at Blizzcon 2011. 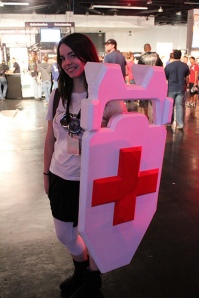