A good friend of mine and Alice’s had asked us to make a staff to go along with her awesome Blood Elf costume. She felt that we could help her with this and the following is a pretty quick tutorial on a pretty simple cosplay prop.

Golden Staff of the Sin’Dorei was the requested prop. I was a little heasitaint at first because she asked to make the gems glow!  Overall the design is pretty simple and I was in luck becouse I had just picked up a new scroll saw at a garage sale for $50 bucks!!!

I started with a image from “WOW model Viewer” and with the help of MS paint, I resized the image to fit my needs.

I used the line tool to darken the edge of the wire frame to ease the transfer of the image over to the MDF board.

The image is a bit light on the board and this was due to my own fault. I used a process that Volpin used.  He uses an inkjet printer and vellum to print on the the MDF board. Tutorial to follow in short order, slightly complex and tough to explan without photos.

Using my new scroll saw, I quickly cut away all the excess material and within about 15 minutes I had a perfectly shaped “no sanding needed” staff head!!

Next was adding the bulk to the staff head and cutting out the bottom of the staff. I opted to use pink insulation foam for this because I was worried about weight concerns. Expanding Foam could have been used to a similar effect, but this seemed to be the best option. 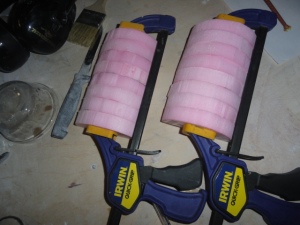 Two stacks of 8 layers of foam were created to add the thick barrel section of the staff head. I used medium streangth adhesive spray #77 to glue it all together.

It was a bit over sized so that I could cut away material to get it down to the size I needed and the angles I wanted around the gems. Most of the foam was removed with the used of 120 grit sand paper and the ever needed vibratory multi-tool.

Now that we are down to a shape that I am happier with, it was time to add the extra thickness to the “wings” of the head. I did a simple trace on to a sheet of foam and used the scroll saw to cut off my peices. 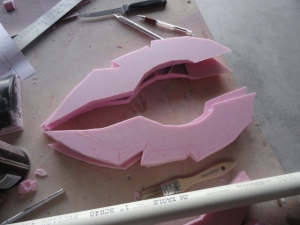 A quick bevel at the bottom so it would sit flush against the thick “barrel” portion and we were starting to get a shape much closer to out finished project.

I did some bevel work to blend the front and back together more in keeping with the image. I created a template for where I wanted the “beveled” edge to stop and just removed everything else around the edge down to the MDF board now sandwiched in the middle of the foam. The whole prop received 3 layers of Gesso to help with strength and smooth out some issues with the foam. Once it was dry, I sanded the entire staff head with 600grit sand paper to really give it a great smooth surface to paint on.

I needed to create gems for this project so this required me to hand shape them. I used Fimo clay to create the shape. Once the clay had been baked to harden, it is able to be sanded down to make nice shard angles and smooth surfaces which will be critical. All work done now makes the gems all the much easier in the end. We wrote a separate tutorial for the gem creation process How to make Gems which explains this process in much greater detail. 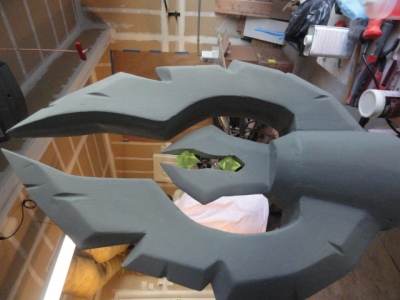 “A quick test fit of gems”

To paint the staff, I gave it and the staff handle a good coat of primer over the gesso, then spray painted it gold. When spray painting on plastic (since I used a pvc pipe for the handle), make sure to either use a primer or paint made just for plastic, or let your paint and sealer set for at least 24 hours for it to stick. I then went over everything with a coat of Krylon Crystal Clear to seal it.

Now that I have the gems cast and all the sanding and paint are complete it was time to install the LED lights that will provide the glow. 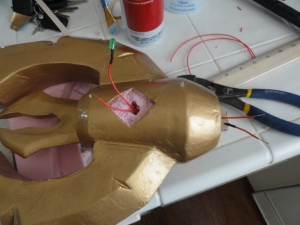 I started by drilling a hole from the center of the gem mount down at an angle to the bottom of the head. This allowed me to feed the wires without much issue and once they were run I was able to mark and cut to length.

This mess of wires is a pretty simple LED circuit powered by a CR123 battery at 3volts. The run time should be about 14 hours of illumination. I also included a small on/off switch on the shaft of the staff.

All wires were installed and I backed the gems with alluminum foil for added reflectivity and to add the the “brilliance” that will show when photos are taken.

One last piece of the staff remained. The trim that surrounds the gems on the head of the staff would help cover the edges and finish the look. I used balsa wood for this due to how flexable it is and the fact that I had extra laying around the craft supplies in my house. 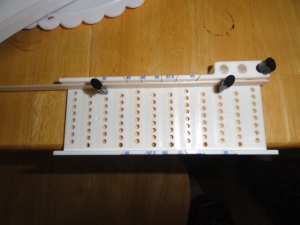 I cut 8 pieces at a 45 degree angle to make a simple surrond for the gem. All parts were placed in a veggie steamer basket in a bot of boiling water to head and soften the wood for bending.

I used rubber bands and 3″ diameter bottle to help shape the pieces as the cooled. Once they had cooled and dried they will retain that shape.  These were glued together and painted and attached to the staff. 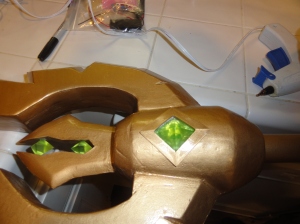 This project took about 20 hours of work to complete and a total material cost of approx $50 dollars. Casting material for gems not included. Over all I think this was a very successful build and I hope it helps you any projects you may be planning.

17 thoughts on “How to: make the Golden Staff of the Sin’dorei”