We are two (now three!) people who happened to meet while in costume, and then found out that we made an awesome pair- and an awesome cosplay team! Mario is awesome at making armor and weapons, while I specialize in wigs and accessories, and we’re both learning to sew.

Dino, Mario’s brother, recently joined the Arms, Armor, and Awesome group after he made his first costume for BlizzCon 2015!

We do take commissions, and try to work with all budgets. Feel free to email us at tripleacosplay@gmail.com with any questions about commissions.

When we aren’t making costumes, Mario plays around with one of his many other hobbies, including video games (lots and lots of World of Warcraft), Warhammer 40k, reading Star Wars novels (and collecting them, apparently), and D&D. 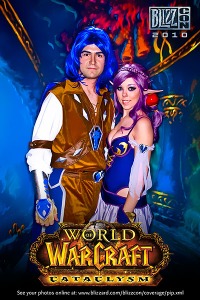 We started Arms, Armor and Awesome cosplay because we felt we had learned a lot of things that we wanted to share with our fellow cosplayers, and wanted to help others with their costume making endeavors.

Arms, Armor, and Awesome is a participant in the Amazon Services LLC Associates Program, an affiliate advertising program designed to provide a means for sites to earn advertising fees by advertising and linking to Amazon.com.