So last week, Mario told you all how he put together the skeleton structure of the wings. We were going to add how we finished the wings but we felt like the post was getting a bit long, so here you go! 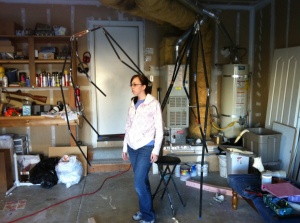 Once we had the skeleton of the wings taken care of, we took the wing stand that Mario built using some scrap wood and the base that the body sculpture was on outside so that we could have more space to work on the foam. 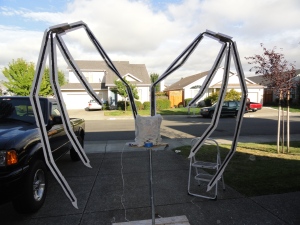 I cut strips of cardstock and hot glued them around the wings to act as a guide for the expanding foam, and also to help the foam stick to the wings. It took ten cans of expanding foam, but we got it all covered! We wanted the wings to sit flush against my back so it looked like the were coming out of my back, so we also covered the bottom where the corset was with foam, first covering all around the corset and the metal that was going to be covered with foam so that it was kind of a sock that went over top of the metal that was sticking out of my back, if that makes sense.

We ran out of foam a few times and had to run back to the store to finish covering the wings… we also ended up bringing them inside so they could fully cure inside and not worry about the wind or some really mean person coming and knocking them over.

Once it was completely covered, I took a knife and started shaping the foam. it helps to kind of draw the general shape you’re going for on the foam. I feel like we should have made the wings a little more thin, but it was really as thin as we could make it, since the most thin parts of the wings were already about as thin as the rods themselves. 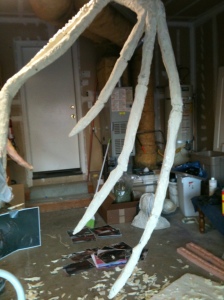 Once we had it fully carved, we sanded it down so it was more smooth, and essentially painted the wings with a mixture of modelling paste and paint. We did go back over it all with more paint to make it all even, but mixing the paint in with the paste helped give it a darker background to paint over. When we painted over it again, we did not use straight paint, but instead a wash of paint plus water, into a much thinner consistency that still gave off color, but wasn’t so opaque.

I used a chip brush for the main coat of brown, then after each side was dry and covered, went in with a sponge and some watered down black to darken the joints. After that, we mixed some of a kind of mustard brown color to lighten the middle parts of the ‘bone’ in the wing.

And there you are! Completed wings, generally light weight, only 8lbs each.

11 thoughts on “Queen of Blades Tutorial Step Eight and a Half: finishing the wings”