Okay. Now on to the smaller castings of your body parts.

We purchased 15 lbs of alginate from Monster Club, we got a lot of our materials from them and Frends. We may have used 12, maybe, but it’s best to have extra, and to make sure that in case you mess up (we did the first time, you have to learn how to feel when the alginate is about to set up). We also purchased 4 boxes of 12 rolls of bandages, and we almost used all of them up. We suggest prepping your area before you begin, of course. We put a cardboard box on our table to protect it, but you could use a cheap plastic tablecloth instead. Have at least two people other than the person getting cast to help, one to wet the bandages and help apply alginate, and one to apply and mix alginate and apply bandages. Also, make sure you cover the floor you’re working on, plaster is pretty hard to clean up if it gets into carpet or tile, you have to scrape it off and I know you don’t want to ruin your floors! 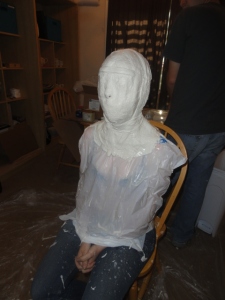 For the head, I followed instructions in the book I suggested you get, Special Effects Makeup for Stage and Screen. I will be referencing this book a LOT, so if you plan on doing anything special effects related- prosthetics, fake teeth, sculpting, wig making, etc- definitely pick it up. Other sites you can see how to do a full head lifecast are: Head casting procedure with Accu-cast (you can substitute accu-cast with alginate, just make sure to cover the alginate with cheesecloth before it sets up completely so the plaster bandages stick.) Another head mold article  Really you can find a ton of head casting videos and articles if you search for them on Google, these are just a few. Also, please remember to wear old clothes you don’t mind ruining I made the mistake of thinking nothing would get on my jeans, and they were ruined afterwards. 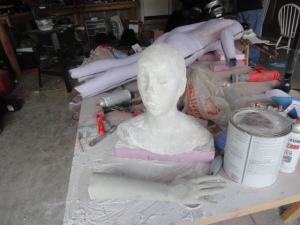 Here is the stone cast right out of the mold (we followed the instructions in the book for this as well, used ultracal 30). It needs a lot of cleaning up, and for the bottom part to be made flat and smooth so it will sit flat on a base. 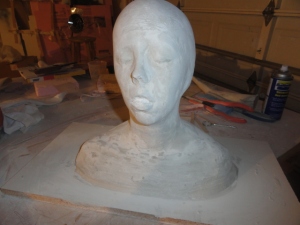 To clean it up we just used sand paper, unfortunately some of my nose fell off here, as you can see, but that’s my fault for not getting enough ultracal into the nose part of the head mold. There were some spots we needed to use bondo on later on, to make sure there were no undercuts at all for the cowl mold. To make it sit flat on a board, we used a non porous board like the one in the picture, it’s laminate covered so the stone won’t stick to it. We sat the head on the board, traced around it with a marker, then mixed up some ultracal 30 to a bit of a thicker consistency (think milkshake that is hard to get through the straw) then put it just inside the line that we just drew. We then sat the head on top of the ultracal, and as it got thicker, scraped it up the sides and covered any holes with it. After it fully cured the next day, we took some sandpaper to the edges on the bottom and cleaned it up nicely. Okay. Now for the hands. We didn’t take many pictures of the hand casting process, but it took us a few tries to get it just right. We’ve seen several methods where you would make a triangle shaped box that was as high as your arm (as far as you wanted to cast it), then fill it with alginate, and quickly stick your arm in there before it sets up. We tried this method, but though I thought my fingers were far enough apart, they were not, and it was hard to see if my wrist was perfectly straight or not, so we failed at that method. 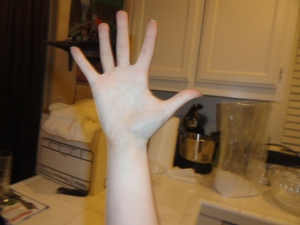 My fingers apparently don’t spread very apart from each other. Make sure that your fingers are spread as far as you can get them, and your wrist straight. Prep your hand/arm beforehand with Nivea cream or vaseline to keep the alginate from sticking. Make sure that when you apply the alginate, to apply it at LEAST 3 inches beyond where your gloves are going to end, to account for molding and sculpting it, you’ll see this in later tutorials.

This is with alginate and cheesecloth on my arm. The cheesecloth is put on the alginate before it sets to make sure the plaster bandages stick to it. What we did was cover the entire arm, both sides, in alginate and cheesecloth, then covered one side, then the other in plaster bandages. When you do the other side in plaster, make sure that you overlap about an inch to help with fit when putting it back together. When it all sets up, gently cut the alginate a tiny bit, I was able to slip my arm out without having to open the whole thing.

After you get both arms done (do them very quickly if you want to cast both in ultracal at the same time, or cast them one at a time, then mold it in ultracal before you cast your other arm. Either way, keep in mind that alginate is a temporary material, and will fall apart if you don’t use it right away.) then make sure to wrap plaster bandages around them to close up where you opened it to take your arm out. To mold the arms in ultacal, put them in a bucket or box so that they’re supported and standing upright completely (you don’t want the bottoms of the arm to be slanted). Then, mix up enough ultracal 30 for the arms, and pour the cement in there until they’re full. That’s it! You  need to put some steel tube into the arm to help you pull it out, you can either hold/prop it into the end of the arm mold while it’s setting, or use a masonry drill bit to drill into the end of the arm (very carefully and slowly!) and glue the tube in there with at least three inches sticking out of the end with two part epoxy.

Let the ultracal set, at least three hours I think before you take it out, but we left them in overnight to make sure that they were completely hardened. Lastly, take a rounded masonry bit and give the arms rounded keys near the bottom of the arm. Make sure that you put them right in the middle of the top and bottom side of the arm, so that they don’t leave any undercuts!

You should now have a set of stone arms, but you aren’t done with them yet! Now you need to make molds of the arms, so that you can cast them in resin, and make the fingers detachable so that when you cast the gloves out of foam latex, the fingers won’t break off when you’re trying to take the glove off of the arm mold. To do this we made a fiberglass mold, but we strongly suggest doing a silicone mold if you have the materials available. The reason being, fiberglass is very hard, and it will be difficult to take out of the molds, and the stone will be very hard to clean out of the molds. With silicone, it will be  very easy to take out, and easy to clean up.

Ok. The tutorial for the second part of the arms will be the next one, but first I want to finish up this part of the tutorials with how we did the feet.

I don’t have photos of the process, but it was pretty easy, I think.

We suggest sitting on a high stool, as close to standing as possible with your feet flat on the ground with the shoes. Protect the area with cardboard or newspaper, and do this on a wood or linoleum floor as well, since carpet is plush and you won’t get as good of a mold with a soft floor.

Put Nivea cream on your foot and up your leg as far as you’re casting, then put on the shoe. We actually bought two pairs of shoes, one for the casting and one for actually attaching the appliance to, since the vaseline ruined the first pair of heels. Make sure you cover the heels in vaseline so that the alginate doesn’t stick to anything!

We decided to split the foot in half vertically. First I stepped in a little of the alginate, to make sure we got the bottom of the shoe cast as well, the we did the right half of my foot in alginate. If you’re using heels, the seam is very important. Make sure that you put lots of alginate under the heel too, because under the foot is as important as on top.

Then we just carefully pulled my foot out, closed it and wrapped more plaster bandages around it (while keeping it on the cardboard it was originally on) and poured ultracal 30 into it. 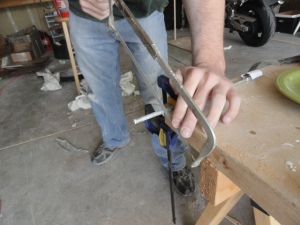 We cut the heel off, and cleaned it up with sanding paper, then drilled a hole where the heel was and made a mount for it out of a chunk of wood and a rod through the pipe. This helped make it more stable for sculpting, and easier for us to mold later on.

…One of ours was a bit taller than the other, that was our fault for not remembering how high up we had made the other one.

Okay. That’s it for this part of the tutorial series, the next tutorial will be on finishing up the hand mold and making the fingers removable for the glove molds! Let me know if you have any questions, or if I didn’t explain something in depth enough!